Money-Market Roller Coaster Must Contend With Stock Trades, Too 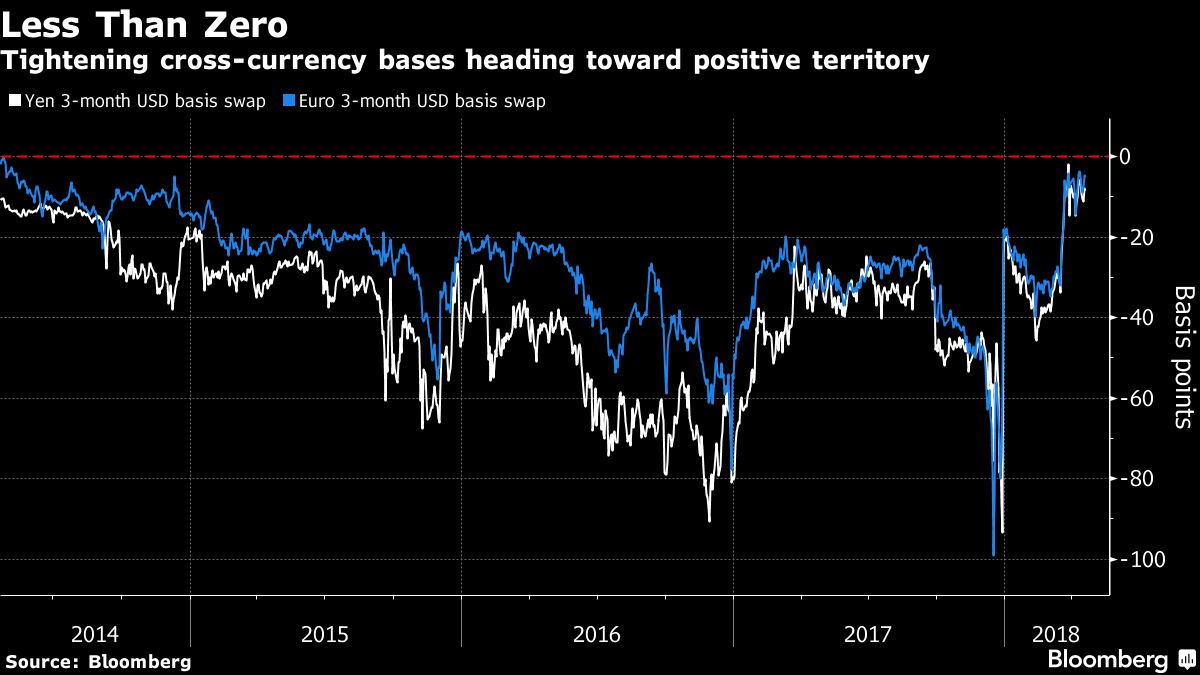 Thank the U.S. stock swoon for easing pressure on a key corner of besieged global money markets -- the cross-currency basis. It may even help flip the axis for dollar premiums around the world, pushing them into positive territory.

Thank the U.S. stock swoon for easing pressure on a key corner of besieged global money markets -- the cross-currency basis. It may even help flip the axis for dollar premiums around the world, pushing them into positive territory.

A drop in investor demand for equities may have been a catalyst for the recent narrowing in cross-currency basis -- a part of the cost of hedging for foreign investors buying U.S. assets. That dynamic has helped offer some relief as short-term dollar interest rates have risen to crisis-era highs, according to one Wall Street money-market guru.

“We are witnessing the first major example of how an equity selloff impacts basis markets” since global bank-capital rules were tightened, Credit Suisse Group AG’s Zoltan Pozsar wrote in a recent note. “Every segment of the global dollar funding market is in flux.”

Expecting strong client interest for stock exposure, investment banks had prepared sizable funding for their equity desks, the strategist explained. Yet demand slumped after the February selloff and the glut of cash was quickly shunted to currency desks and out into the market. That accentuated the tightening in the cross-currency basis, the premium investors pay to procure dollars, he said.

“When equity markets fall and client interest to go long equity futures wanes, banks’ equity futures desks get overfunded on the margin, which spills over into FX swap market,” wrote Pozsar, whose pronouncements on the technicals of money markets are closely followed on Wall Street.

The relationship is evident from what Credit Suisse dubs the equity-futures basis, an additional premium investors pay in the total return swaps market, which reflects the imbalance in demand for long versus short positions. In such a swap trade, a participant agrees to exchange the total return of a stock index over a set period, minus the cash flows associated with financing the position, often priced by a dealer at the London interbank offered rate plus a spread.

The very day the equity-futures basis started to collapse, cross-currency bases started to “aggressively” tighten too, according to Pozsar.

A narrowing of currency bases essentially lowers the cost for foreign investors to hedge positions. The premium to convert euros into dollars for three months has fallen to just five basis points, closer to the pre-crisis norm after it blew out to more than 200 basis points in 2008. The yen basis has narrowed to about nine basis points so far this year.

Sadly for foreign investors, as one hand giveth the other taketh away. The improvement in the currency basis has been more than offset by the rise in dollar Libor, which they also have to pay to hedge currency exposure. Its spread over the overnight indexed swap rate, known as Libor-OIS, has jumped to crisis-era levels -- dampening demand for Treasuries and U.S. credit while tightening financial conditions.

The basis narrowing is not purely down to stocks. There’s no data to track financing raised at banks for the equity-futures basis trade, while currency-funding desks are typically much larger. And it’s just one in a slew of technical factors that has cheapened the currency basis of late. But the equity dynamic has been largely overlooked in an increasingly complex money-market landscape.

The U.S. tax overhaul has spurred corporates to repatriate money from abroad while the Base-Erosion and Anti-abuse Tax, or BEAT, has boosted unsecured borrowings -- both in ways that have reduced pressure on the foreign-exchange swap market.

“We will only know the true extent to which reduced hedging needs have caused cross-currency bases to trade tighter this year when the temporary glut of dollars due to overfunding related to repatriation (defensive overfunding), the equity rut (unforeseen overfunding) and BEAT (opportunistic overfunding) fade away,” Pozsar wrote.

All told, the Credit Suisse analyst reckons cross-currency bases will go into positive territory at some point this year, meaning investors would receive a discount to purchase dollars using the euro or yen.

Even if bank-funding desks offer investors long positions on the cheap, it’s small fry compared to stubbornly high Libor, which is reducing the allure of U.S. securities in currency-hedged terms.

Still, the underlying lesson for currency investors looking to hedge is to keep a half an eye on the stock market too.

— With assistance by Cormac Mullen