Russia Wants to Sell Its Missiles to U.S. Allies 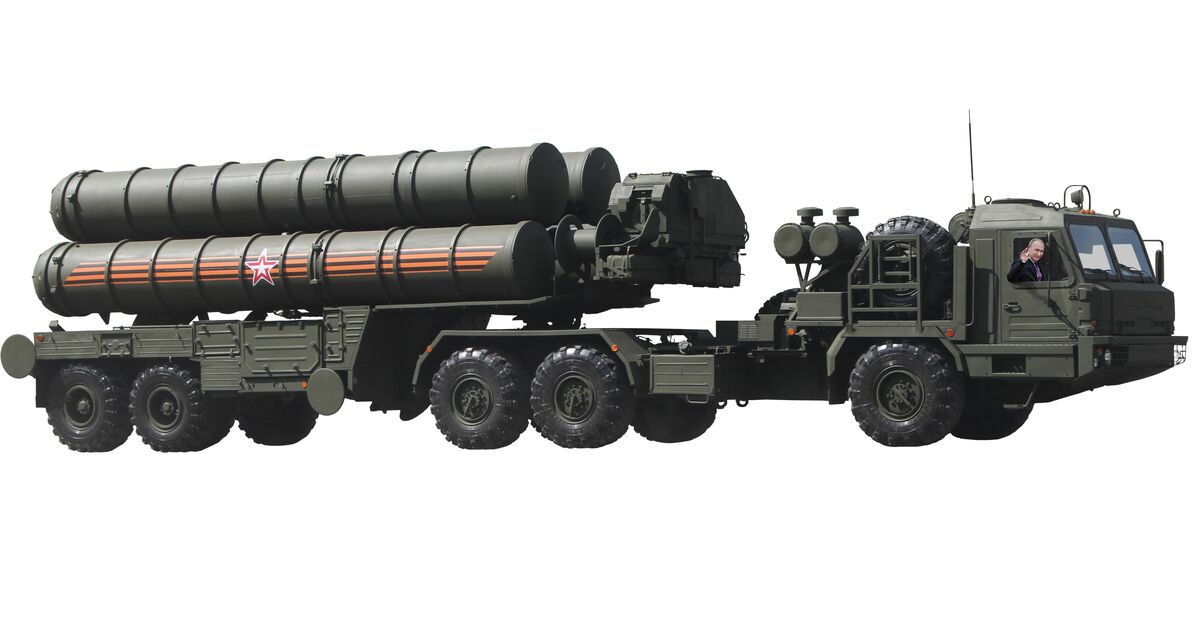 The S-400 has never been used in combat, but it’s already causing geopolitical turmoil.

Russia’s S-400 missile system has never been used in combat. Yet it’s already provoking fights around the world, as Russia searches for buyers in markets long dominated by American weapons makers. China’s neighbors are fretting as the country bolsters its military reach with Russian hardware, encouraging India to follow suit. Tensions between rivals Saudi Arabia and Qatar have ratcheted up as both countries negotiate with Moscow on possible deals, while the recent decision by NATO member Turkey to buy the S-400 has drawn threats of U.S. sanctions.

With Algeria, Belarus, Iran, and Vietnam also likely customers, Russia could generate $30 billion in sales over the next 12 to 15 years, according to the Moscow Defense Brief, a leading publisher of Russian military information. That’s all part of President Vladimir Putin’s plan to use the Russian weapons industry not only to earn billions of dollars but also to drive a wedge between the U.S. and some of its key allies. “The S-400 has both commercial and geopolitical dimensions,” says Vladimir Frolov, a former Russian diplomat who’s now a foreign policy analyst in Moscow. “It creates an opening for Russian influence for years to come.”

The Russian weapon has a few advantages over the only other comparable missile system on the market, the MIM-104 Patriot, made by U.S. company Raytheon Co., according to defense research group Jane’s by IHS Markit Ltd. Both are surface-to-air systems designed to shoot down aircraft and ballistic missiles. But the S-400 has a longer range than the Patriot, 250 kilometers (155 miles) vs. 160 kilometers. An upgrade coming later this year is expected to stretch the S-400’s range to 400 kilometers. It also has a more powerful radar, can destroy targets moving twice as fast, and is quicker to set up. While both systems are mounted on trucks, the S-400 can be ready for action in five minutes, compared with an hour for a Patriot battery. The S-400 is also slightly cheaper than the Patriot, on a per-battery basis.

The S-500, an advanced version comparable to the U.S. Thaad anti-ballistic-missile system that’s capable of downing hypersonic cruise missiles, is expected to enter production by 2022. The S-400 is manufactured by the state-run company Almaz-Antey, which has been sanctioned by the U.S. over Russia’s military support for separatists in eastern Ukraine. Despite that, Almaz-Antey is opening two sites elsewhere in Russia to supplement its Moscow plant. The Russians don’t shy away from talking up the S-400 to potential buyers. It “has no equal,” says state arms trader Rosoboronexport’s spokesman Vyacheslav Davidenko. “Russian air-defense systems don’t allow anyone to attack without paying a price.”

The Patriot has superior anti-ballistic-missile capability, says Omar Lamrani, senior military analyst at Stratfor Enterprises LLC, a Texas consultant. It can also be integrated into other U.S.-made missile-defense systems, increasing its effectiveness. The Patriot has a long and successful track record on the battlefield, having come to fame during the 1991 Gulf War. But its performance recently has come under scrutiny. In March video footage appeared to show a failed Patriot launch as Saudi Arabia intercepted a barrage of rockets fired by Yemen’s Houthi rebels. One missile did an abrupt U-turn and crashed into the ground in the Saudi capital, and another one exploded midair. It’s unclear whether the Patriots malfunctioned or the Saudi crew failed to operate them properly. Whatever the cause, it hasn’t stopped Romania, Poland, and Sweden from pursuing plans to buy them. Raytheon declined to comment on the misfire footage, and says that the Patriot’s “performance in testing scenarios and in combat speaks for itself.”

Russia has a history of producing strong air-defense systems, dating to the Cold War, when it needed to counter NATO’s air forces. In the early 1990s the U.S. paid Boris Yeltsin’s cash-strapped government $120 million for an air-defense launch complex to study the technology. Now the U.S. faces a growing threat from the sale of Russian advanced weaponry to its strategic rivals and erstwhile allies.

In 2014, China signed a $1.9 billion deal to buy 32 S-400 launchers, each equipped with four missiles, half of which were delivered last year, the Moscow Defense Brief says. New contracts with China may be in the pipeline, it adds; these acquisitions will allow the country to threaten aircraft in Taiwan, which Beijing regards as a rebel province, as well as challenge Japan and neighbors in Southeast Asia for control of the skies in disputed areas. “It poses big challenges for the U.S., Taiwan—which it is obliged to protect—also for American allies and anybody who challenges Chinese territorial claims in the South China Seas,” says Alexander Gabuev, chairman of the Carnegie Moscow Center’s Russia in the Asia-Pacific Program.

India, which has had sporadic skirmishes with China since the countries fought a bloody border war in 1962, is in the final stages of negotiating a $6 billion S-400 deal. According to Indian media, the contract may be signed before an October summit between Putin and Prime Minister Narendra Modi.

Turkey risks U.S. sanctions over its $2.5 billion deal, financed with Russian loans, to buy the S-400. Under a 2017 law, the White House has to penalize countries that conduct a “significant transaction” with Russia’s defense sector. A defense spending bill passed by the U.S. Senate on June 18 calls for a freeze in arms sales to Turkey in response to its S-400 purchases. The bill also calls for the removal of Turkey from the F-35 joint strike fighter program, a multicountry, $400 billion plan to build and sell tactical jets to allies. Turkey was a key member of the program; it had ordered 100 F-35s and was slated to co-produce the jet. Some of its companies are the sole producers of essential parts in the supply chain. “The Turks have got to decide whether they’re going to be in NATO or aligned with Russia,” says Senator James Lankford, an Oklahoma Republican.

Despite the threats, Turkey’s foreign minister, Mevlut Cavusoglu, says the deal to buy the S-400 is done. On June 13, Turkish President Recep Tayyip Erdogan said Turkey and Russia may also co-produce the next-generation S-500. “Russia seems to have communicated to Turkey that it’s in their interest in one way or another to align with them,” says Thomas Karako, director of the Missile Defense Project at the Center for Strategic & International Studies. “This is one of several ways in which they seem to be hugging their friends to the northeast.” The deal is a major milestone toward improving ties between the two countries after Turkey shot down a Russian fighter jet near its border with Syria in 2015.

On June 21, the U.S. Senate Committee on Appropriations passed an amendment attached to the annual Department of State funding bill that prohibits spending money to transfer the F-35 to Turkey until the secretary of state certifies that Turkey isn’t buying the S-400. “This provision makes it clear that if Turkey ignores the concerns of its NATO allies and moves forward with this partnership with Putin, it will no longer receive F-35s,” Senator Chris Van Hollen, a Democrat from Maryland, said in a statement.

Although losing Turkey as a customer would be a hit to F-35 manufacturer Lockheed Martin Corp., there are concerns that Russia will gain valuable intelligence—insights into U.S. air defense and aerial capabilities—if the country remains in the program. Senior U.S. defense officials have said that if Turkey operates both the F-35 and the S-400, it could compromise the F-35’s security, including its stealth capabilities. “It is in the American national interest to see Turkey remain strategically and politically aligned with the West, and we believe it is also in Turkey’s interests,” Assistant Secretary A. Wess Mitchell said at a congressional hearing in April.

As for Saudi Arabia, the increasingly warm ties it’s enjoyed with Russia, particularly over coordination in the oil markets, have also provoked alarm in the U.S. President Trump’s nominee for assistant secretary of state for near eastern affairs, David Schenker, said during his Senate confirmation hearing on June 14 that he would “tell Saudi Arabia not to do it” when asked about the kingdom’s talks to buy the S-400. During an historic visit by King Salman to Russia in October, Saudi Arabia agreed on other arms purchases, including antitank weapons and multiple-rocket launchers, and licensed Saudi production of Kalashnikov assault rifles.

Neighboring U.S.-allied states Kuwait, Bahrain, and the United Arab Emirates are also acquiring Russian weapons. The advanced Russian missile system has turned into a major bargaining chip in the region as rival powers seek to cement new relations with Russia to balance U.S. influence. In a letter to the French﻿ president, Saudi Arabia warned of “military actions” against Qatar if it buys the S-400, as Le Monde reported in early June.

The S-400 still has an element of “hype,” says Stratfor’s Lamrani. Still, “it has a very promising future—there are places where opportunities are opening up for Russia.” —With Stepan Kravchenko, Daniel Flatley, and Erik Wasson.