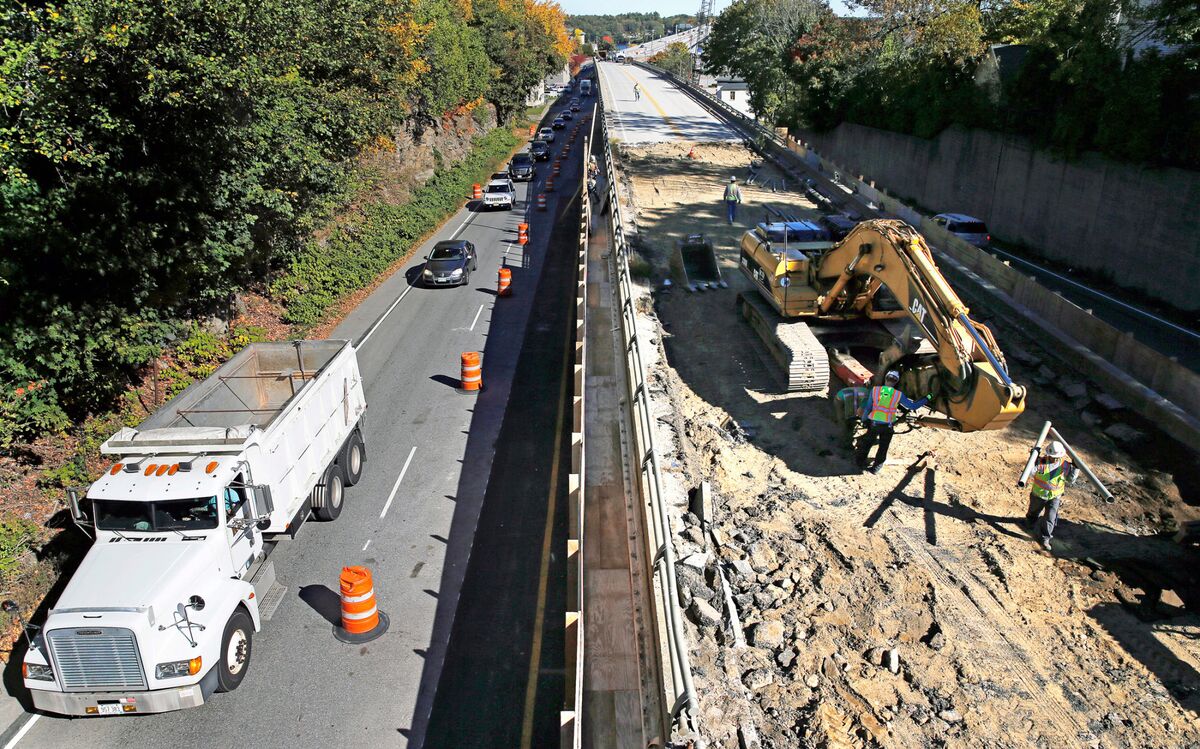 The first year of Donald Trump’s presidency began with hopes for a unified effort to fix U.S. highways, bridges and airports. His second year begins much the same way. There was talk in 2017 about advancing a sustained infrastructure-improvement program, but there was little progress -- a reflection of the president’s priorities and the differences between Republicans and Democrats on how to pay for and carry out such an effort. That hasn’t kept Trump from predicting bipartisan agreement on the issue in 2018.

1. Why didn’t an infrastructure program get done in 2017?

It got displaced by other political initiatives, including the unsuccessful one to overhaul health care and the successful one to cut taxes. Trump had promised during his winning 2016 campaign to introduce a $1 trillion proposal to address national infrastructure "that is absolutely decaying and rotting and falling apart" -- roads, bridges, tunnels, airports, railroads, ports, waterways, pipelines -- within his first 100 days in office. That deadline came and went. Then the administration said there’d be a plan by the third quarter. A detailed one never arrived, only a six-page fact sheet. A planned advisory council of builders and engineers, to be led by Manhattan real estate developers Richard LeFrak and Steven Roth, never took shape; it was abandoned, along with two other business councils, after Trump caused public outrage with his comments about violence at a white-supremacist rally in Charlottesville, Virginia, on Aug. 12.

Trump has vowed to tackle infrastructure in recent weeks on Twitter ("After having foolishly spent $7 trillion in the Middle East, it is time to start rebuilding our country!"), in an interview ("I want to do a trillion-dollar infrastructure bill, at least") and in public statements ("I could have started with infrastructure" but "I actually wanted to save the easy one for the one down the road. So we’ll be having that done pretty quickly.") A senior official in his administration has said the White House plans to release, this month, a detailed set of principles for upgrading roads, bridges, airports and other public works to start the legislative process.

The American Society of Civil Engineers gave America’s infrastructure a grade of D+ on its 2017 report card and estimated that roads, highways, bridges, water systems, schools and transportation systems collectively need $4.59 trillion in investment by 2025, with a funding gap of about $2 trillion. Though civil engineers might be seen as having a stake in painting a dire picture, the raw numbers are pretty bleak: 28 percent of major urban roads in substandard or poor condition, 240,000 water main breaks each year, 56,007 structurally deficient bridges in 2016. The average age of the nation’s fixed assets in 2015 was 22.8 years, the oldest in data back to 1925.

4. What will the White House propose?

The plan being developed would significantly shift responsibility for funding from the federal government to states and localities -- which own or control most assets -- by providing incentives for them to generate their own sustainable funding sources. To come up with $1 trillion, the plan would allocate at least $200 billion in federal funds over 10 years, from unspecified budget cuts, to spur at least $800 billion in spending by states, localities and the private sector. The largest share of funding would be cash for which states and localities could apply, with preference given to those that raise taxes, tolls or other revenue for projects. Other White House ideas include transferring control of the air-traffic control system to a nonprofit corporation and eliminating the restriction against tolling on interstate highways. A major part of the plan would also be streamlining environmental reviews and permitting.

5. Could Republicans and Democrats work together on this?

Despite Trump’s promises of bipartisanship, Democrats are calling for much more in federal spending than his administration is proposing and Republicans may be willing to approve. Still, Republicans are likely to need some Democratic support, unlike in their push for tax cuts. That’s because a bill with significant new spending would most likely need a supermajority of 60 votes in the 100-seat Senate, where Republicans hold only 51 seats.

Because a bipartisan infrastructure deal didn’t emerge in 2017, it might be harder this year, with funding tight and political considerations on the front burner. Infrastructure advocates had hoped the Republican-led tax overhaul would identify a funding source, such as repatriated offshore corporate profits. That didn’t happen, and now the estimated cost of tax cuts -- $1.5 trillion over 10 years -- puts an added burden on spending for any new federal program. There are also concerns that the midterm elections in November could stall any major legislative effort, though advocates think improving infrastructure could have bipartisan support in an election year.

7. What are the stumbling blocks?

Democrats, governors, mayors and some infrastructure advocates say state and local governments are already doing their fair share to generate funding for projects, and that much more than $200 billion from the federal government is needed. But there’s no agreement on raising the federal gas tax or other ways to generate more money. The tolls and fees that might be needed to make highway work profitable are unpopular, impractical, or both in many areas of the country.

8. Is there another way?

A group of Senate Democrats proposed its own blueprint for a $1 trillion infrastructure plan, paid for directly by the federal government. But Republicans who control Congress have said they won’t support that much in new spending.

— With assistance by Erik Wasson